The Chakrasambara Tantra or Khorlo D?chok Tibetan, Wylie is considered to be of the mother class of the Anuttarayoga Tantra Vajrayana Buddhism. It is also called the Discourse of Sri Heruka, sriherukabhidhana and the Samvara Light Laghusamvara. David B. Gray dates this tantra to the late eight or early ninth century. The Cakrasamvara Tantra is mostly dedicated to describing rituals and meditations which produce either mundane siddhis (accomplishment) such as flight and the supramundane siddhi of awakening. These are achieved through deity yoga (visualizing oneself as the deity) and the use of mantras.

There are no reviews yet.

Be the first to review “Chakrasambara” Cancel reply

Range of Products
Our Best Sellers
Browse by Categories 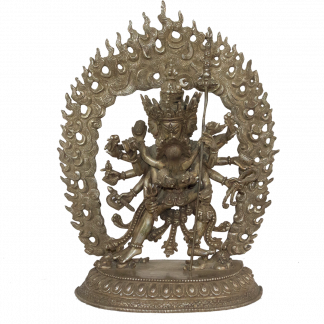