Vajrakilaya is a yidam deity (or godform, refer thoughtform) who embodies the energetic activity of all the buddhas, manifesting in an intensly wrathful yet compassionate form in order to subjugate the delusion and negativity that can arise as obstacles to the practice of Dharma. Vajrakilaya is also used as a name for a ritual tool used in Buddhism, Bon traditions. The tool is known as a kila or kilaya in Hinduism. Vajra Kilaya is also the godform of a deity also known as Dorje Phurba.

There are no reviews yet.

Be the first to review “Bajrakilaya” Cancel reply

Range of Products
Our Best Sellers
Browse by Categories 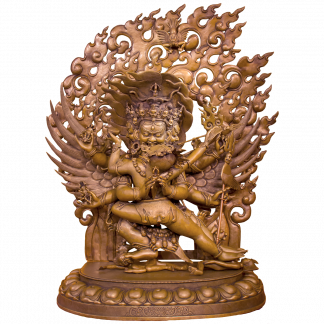